Communications agencies got back on their feet in 2021 after a deflating 2020, but this is no time for marketing and PR firms to rest on their laurels, according to a newly released agency survey and report from marketing business development firm RSW/US.

This year’s annual survey and resulting RSW/US 2021 Agency New Business Report saw many small and mid-sized agencies growing or regaining lost growth from the previous year. For example, 38 percent of agencies said it was easier or a lot easier to obtain new business this year, vs. just 7 percent in 2020. And “business from existing clients” was reported as the most effective method/tool for bringing in new business (71 percent).

But with this rise of organic growth, firms should be aware of warning signs heading into 2022

The first is a multi-year decline in referrals, traditionally the predominant method for agencies to gain new business. There was a slight dip from 62 percent in 2019 to 60 percent in 2020. 2021 saw a deeper drop—to 53 percent.

Another sign: agencies are not investing in the development of “new” new business

This plays out in the low percentages (all under 10 percent) attributed to phone calls, social media, inbound, and traditional mailings.

A few other key stats that exemplify the lack of a strategic plan around “new” new business:

The growth for so many firms in 2021 should be celebrated, but change is a constant in our industry, and existing growth will not last at these levels. It’s critical heading into 2022 that agencies have a manageable framework for “new” new business.

Some of the other highlights from the new report:

With new business apparently being easier to come by in 2021, agencies are not pressed to hire for the role. But, as demonstrated in the report, one thing that can always be counted on in our industry is change and the cyclical nature of the industry as a whole.

With a 10 percent increase in agencies saying it was harder to obtain new business because prospects go dark (32 percent this year, versus 22 percent last year), follow-up is as important as ever to the new business process.

Referrals, traditionally the predominant method for agencies to gain new business, are seeing a multi-year decline

Seventeen percent of agencies said, through Q3, they took part in competitive pitches more than once a month

With multiple pitches in a month, it would be very tough to focus on much else to any great extent. It also makes it tougher to deliver the kind of personalization you really need to differentiate your agency in a pitch. Well done!

Eighteen percent of agencies said in 2021 to date they answered 10 RFPs or more!

In a follow up question, the firm asked, “Is your answer to the previous question an increase or decrease over 2020?” 57 percent of agencies cited an increase.

Thirty-four percent reported posting frequency at once a month, 22 percent post twice a month, and 18 percent are posting once a quarter.

How long it takes (on average) to move from a 1st meeting, to closing a piece of business?

Eighty-seven percent of agencies said a month to six months. This is compared to 73 percent last year, still confirming that the process simply takes time. Of course, without consistent, value-based follow up, your chances of closing go down precipitously. 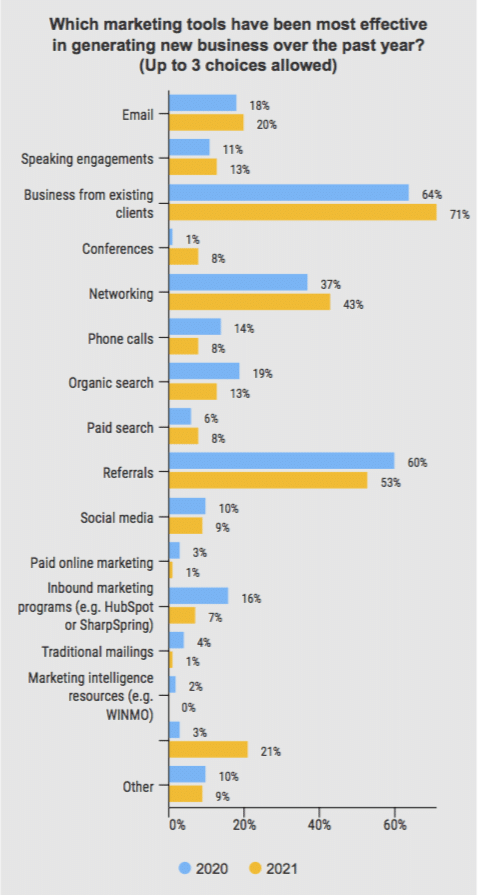