PR pulse: Gen Z, Millennial voting behavior is based on issues, not candidates

This election season has become about far more than politics for Gen Z and Millennials (ages 18-37)—in fact, they report that it’s turned into the fight of their lives. New research from social-first entertainment firm Fullscreen examines the voting behaviors of these younger Americans in the upcoming election—and shows that these cohorts are voting to support causes they feel are not political, but essential to life as we know it.

Given the high stakes, 72 percent of respondents believe that we are at a turning point in American history, and 90 percent plan to vote in the upcoming presidential election. Brands are part of these generations’ considerations as well, with 60 percent agreeing that they expect brands to take a stand on social issues in 2020, 43 percent agreeing that brands should be outspoken on political issues, and 43 percent saying a brand’s stance on certain issues would impact their decision to purchase from them.

“Political activism and involvement are evolving for these younger generations. Our election survey makes it clear that social issues and ethics are their top concerns, while political party affiliation and leaning has little impact on how respondents plan to vote,” said Crystal Surrency, SVP of Strategy & Insights at Fullscreen, in a news release. “Understanding the nuances of Gen Z and Millennial people—via their behaviors, values and mindsets—is critical to understand as humans, and as marketers. Their way of thinking is one of the more fascinating subplots in what looks to be a historic election.”

Additionally, the survey findings show that during this election year, Gen Z and Millennials plan to vote for candidates who support issues they care about over political party affiliation. Government reaction to the COVID-19 pandemic and Black Lives Matter events have also had a significant impact on who respondents plan to vote for at all levels of government. In fact, Ethics is what is most important to voters in this election, with 41 percent saying it was the top factor driving their vote, followed by Policies (28 percent), Personality (18 percent) and Political Party Affiliation (9 percent).

Respondents were asked questions about politics across a variety of categories, from general voting behavior to social media use and brand engagement on political issues. 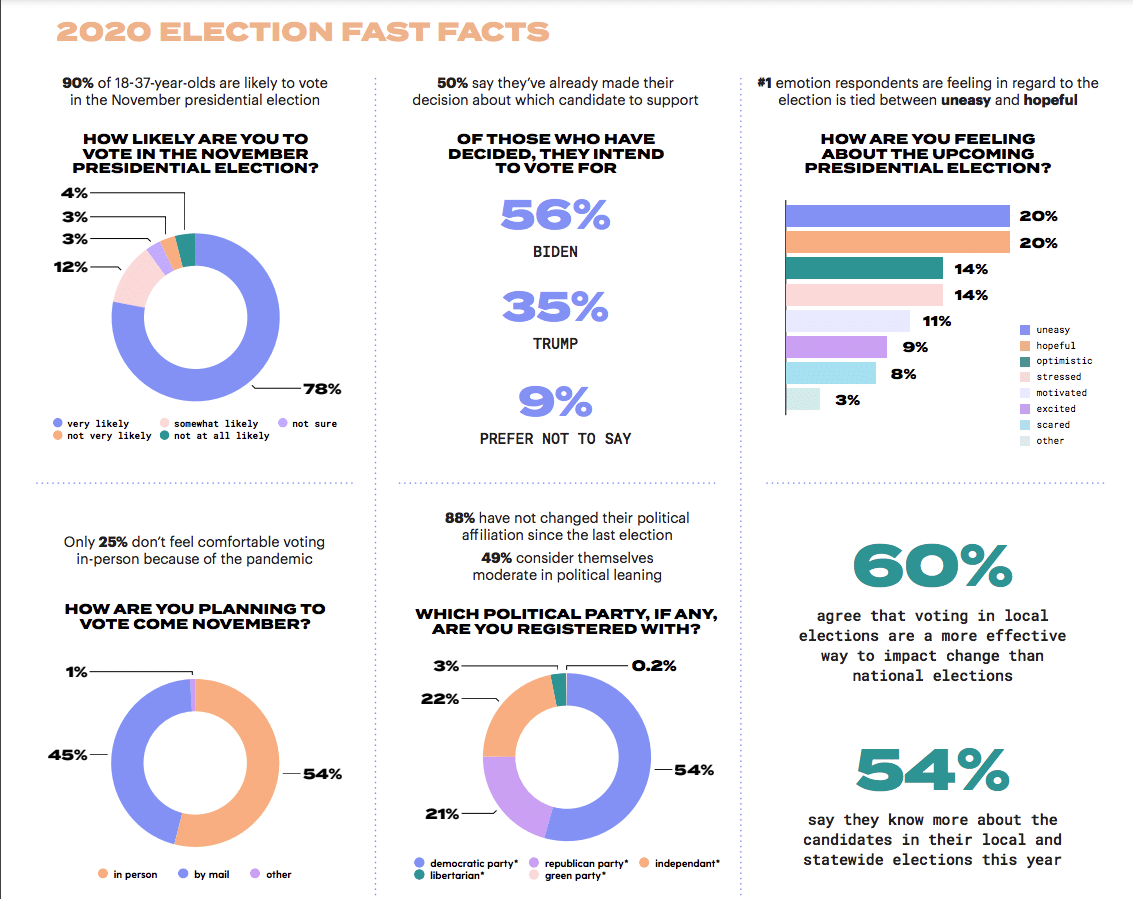 Fullscreen’s proprietary panel of 18-37 year-olds, called To Be Honest (TBH), enables the company to tap into key concerns and issues that are important to younger generations during this unpredictable election period. Election Survey (n=412) occurred during July 2020. The Political Survey (n=523) cited as last year’s comparison data, occurred during April and May of 2019.