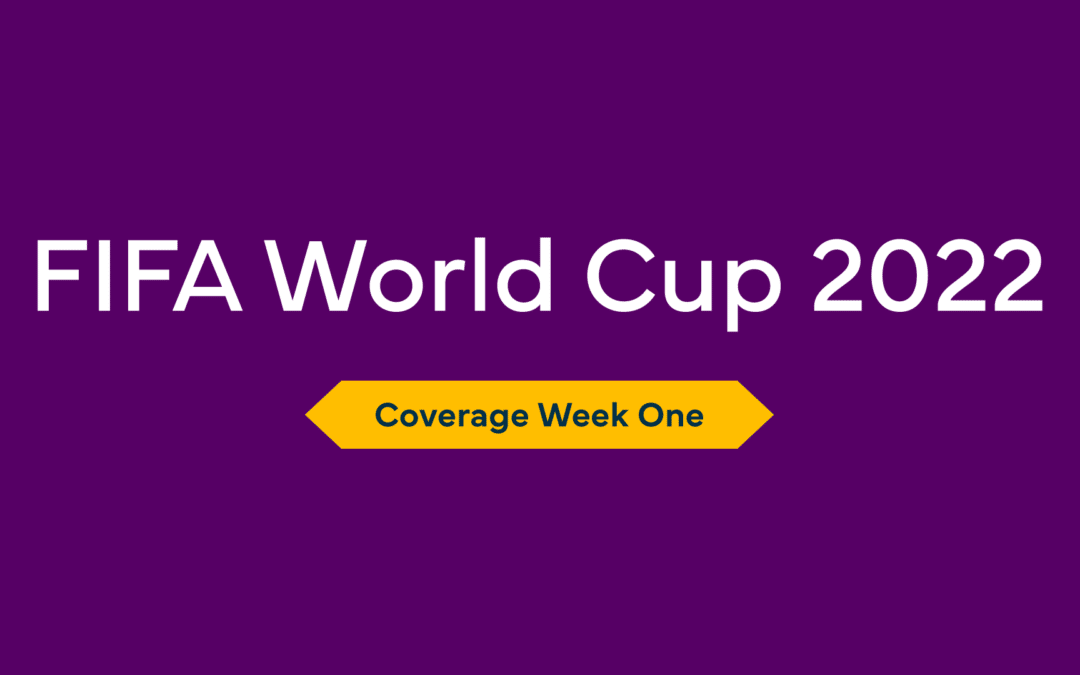 We are now more than a week into the 2022 FIFA World Cup Qatar™. A lot has happened in the first seven days of the tournament—goals, saves, and all the other exciting, nail-biting moments fans live for. But the Media Insights Group (MIG) at Agility wanted to know what was making headlines off the field of play—and so did a deep dive into the World Cup coverage pouring in from around the world using Agility’s media monitoring solution.

Here’s a look at what they found:

Top stories from the World Cup

The three top trending stories MIG identified probably won’t surprise you, especially given this year’s host—Qatar—was and is a source of contention due to its human rights record. They are: Out of online coverage related to these three topics, the human rights story had the greatest share of voice at 47%, with anti-LGBTQ sentiments second at 44%. However, Twitter was a different matter. On the social media platform, the anti-LGBTQ story took up a substantial 58% of the conversation with the alcohol ban coming in second at 29%. Considering that Americans drink 325.5 gallons of beer on Super Bowl Sunday, one can only imagine the amount of alcohol that could be sold during a 29 day tournament.

But on November 18, two days before the World Cup began, FIFA released a statement that said: “Following discussions between host country authorities and FIFA, a decision has been made to focus the sale of alcoholic beverages on the FIFA Fan Festival, other fan destinations and licensed venues, removing sales points of beer from Qatar’s FIFA World Cup 2022™ stadium perimeters.”

Some fans were not pleased.

One of the top stories pulled by MIG during its investigation of this theme was from CBS News, which read: “European Parliament has formally condemned Qatar for suspect human rights abuses that are believed to have caused the deaths of migrant workers contracted to build preparations for this year’s world cup.”

The story that had the most amount of traction on Twitter and the second most on online news was the anti-LGBTQ sentiment which was largely driven by the “One Love” armbands.

The captains of the England, Wales, Belgium, the Netherlands, Switzerland, Germany, and Denmark teams were originally committed to wearing rainbow “One Love” armbands during their opening matches in silent protest of Qatar’s criminalization of same-sex relationships. The teams were prepared to pay the fines associated with wearing an item of clothing that would breach kit regulations. However, only hours before the first matches, FIFA announced that captains wearing the armband would be issued a yellow card immediately upon start of game. After this announcement, the associated teams put out a joint release stating that they would no longer wear the armbands as “we cannot put our players in the situation where they might be booked or even forced to leave the field of play.” From November 20 to November 27, the armband story received tens of thousands of mentions and millions of impressions in online news with two spikes in coverage on November 21 and November 23:

It wasn’t about making a political statement – human rights are non-negotiable. That should be taken for granted, but it still isn’t the case. That’s why this message is so important to us.

Denying us the armband is the same as denying us a voice. We stand by our position. pic.twitter.com/tiQKuE4XV7

Regional coverage of the “One Love” armband story

The countries talking about the armband story the most were the US, the UK, France, India, and Canada . MIG took a sample of the top 200 stories (as determined by impressions and excluding reprints in Yahoo and MSN) to gauge sentiment. Largely, the stories were identified as being neutral with only 33% identified as negative. The neutral stories were more informative and balanced with no explicit FIFA criticism or only containing a passing mention of the ban. The negative stories were primarily about the criticisms FIFA has faced because of its decision.

The US, the UK, and India had the most stories included in the 200 articles analyzed for sentiment. Of the 114 articles published by US media about the armbands, 35% were deemed negative. Thirty-five percent of the UK coverage was also categorized as negative with India in third at 28%. This analysis only considered online news and Twitter from November 20 to November 27, 2022. What is social listening

Looking for a solution that will help you sift through the billions of daily social media...